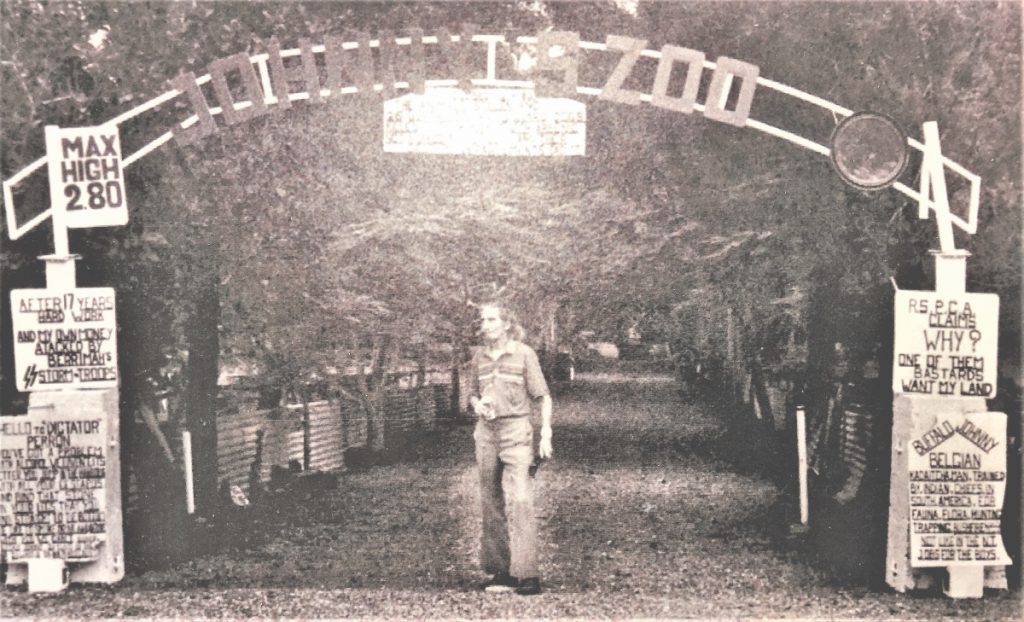 The Buffalo Johnny Project started many years ago.  SBS had approached me and made a query as to if there might be an interesting Top End topic for an SBS program.  My good friend, Jacki Fleet and I had just taken our kids on a road trip to Litchfield Park and we’d made a stop at the infamous “Johnny’s Zoo”.  That day, we spent time with Johnny and listened to some of his remarkable tales.  We both felt that while “Johnny’s Zoo” had many controversial sides to it, it would make a fabulous documentary.  We had to first put together a proposal.  To do this we interviewed thirty seven people and plowed through hundreds of newspaper and magazine articles.

We were very lucky to have the help of Elka Kerkhofs, who translated the interviews we did with Johnny’s brother, Edmond and sister Rosa.  We also reviewed numerous letters and legal documents about the zoo.  Most of the time, people were happy to talk about the zoo.  The shared recollections of the men and women who literally first settled in this remote and very rugged part of Australia was inspiring.

The lows were the rejections and the difficulties Jacki and I sometimes encountered when doing the investigations for the program.  At the beginning of our research, the story of Johnny’s Zoo and its closure was still quite a contentious topic.  Sometimes we were denied access to important information such as when the NT Archives Service wrote a letter on our behalf in 2001 to the Parks and Wildlife Commission seeking access to the Commission’s Zoo closure files.  The request was flatly denied by the Director, W J Freeland. We were told that we might be able to access that material after thirty years.

Sometimes, we had to look closely at the horrors Johnny had lived.  Through his own letters and through our conversations, we were reminded of what really happened to someone who spent more than 2 years living in a concentration camp. This was depressing. But, in many ways Johnny’s story had a good but bizarre ending.  His dream of creating his own zoo became a reality and it was enjoyed by many for many years. His art work is now in the NT Museum of Art.

In the end our proposal was rejected but after all of the months of research we decided to share our findings in a book.  And while this book took a long time to write, hopefully, it will be an inspiration to many and be put at least in the Batchelor Museum for all to read as currently there is no mention of Johnny’s Zoo anywhere.